Operations conclave was hosted in SJIM on 18th of November 2021, where students had an opportunity to interact with industry veterans and gain insight into the current trends and practices in the operations domain. With sustainability being the need of the hour for every business, this year’s theme of the conclave was “Sustainable Operations”. The conclave featured renowned speakers across different industries: Mr. Piyush Sharma (Asst VP, Max Retail Division, Lifestyle International Pvt Ltd.), Mr. Umesh Chaturvedi (CEO, Infynix Data Services), Mr. Derick Jose (Co-founder, Flutura Decision Sciences and Analytics), Mr. Srinivas Rao (Currently associated with BEL). Director, Rev Dr. Manoj D’Souza and Dean Dr. A.R. Rajagopalan were also present in the conclave.

During the conclave, Mr Piyush Sharma addressed how sustainability is practiced in the retail sector. Mr. Umesh Chaturvedi explained the concept of perishable inventory in the context of services marketing and then went on to discuss the criticality of Customer Delight in the service industry. Mr. Derick Jose spoke about how technology has disrupted operations by citing various examples. Mr. Srinivas Rao stressed that sustainability is important not just in business, but in every action in life. The conclave concluded with a captivating dance performance from the cultural team.

The annual "Operations Management Conclave" for 2019 was held on 15th October 2019 in our Loyola Auditorium at 2.00 PM. The theme was "Technological Disruptions in Operations and Project Management". Our, Dean Dr. R Narasimhan proposed the welcome address followed by faculty coordinator, Prof. V J Lawrence who spoke about the objectives of the conclave. There were 5 speakers who spoke at the conclave.

The first speaker was Mr. A N Prakash, Construction Consultant(ANPCMC) and he spoke about the different constraints in construction management and he also highlighted about the project management techniques and recent state of the art projects.

The second speaker was Mr. Kumar Visvanathan, who is currently spearheading Artificial Intelligence (AI) initiatives like Chat-bot and Robotic Process Automation (RPA) for some of the key internal processes. He spoke about the Artificial Intelligence(AI) interventions in operations management and how chat-bots helps Mind-tree in managing the operational activities.

The third speaker for the day was Mr. Harsh Kumar Johari, he is an operations consultant and he gave his instincts and ideas about mobile banking, block chain and AI and machine learning.

The fourth and fifth speakers where Mr. Sai Srinivas and Ms. Shuba Vani from Tata Consultancy Services(TCS). They shared how operations techniques are relevant in the current technological world.

The student coordinator of Operations, Mr. Mohamed Rizwan proposed the vote of thanks.
The MCs were Ms. Adlin Cyril & Ms. Andrea Fuller from I Year.

The Operations Conclave, themed “The Era of Intelligent Operations”, was held on the 4 th of October, 2018 at Loyola Auditorium. The operations department conducted the event keeping in mind the latest trends in the field of corporate operations, with prime focus on Block chain technology, Cloud computing and Live streaming. The objective of the conclave was to consolidate how industries use these technologies in their operating processes.

Four eminent speakers from different sectors of the industry shed light on the topic. The first two speakers were from Akamai Technologies, which is a global leader in content delivery network and cloud services. Mr. Pravin Jairaj, head of account management group for Asia Pacific and Japan at Akamai, gave an insight on the functioning of content delivery network, its power to bridge the challenges of the middle mile and to scale content and services globally. Mr. Sharath Rao, head Akamai Professional Service team for the European region, explained how block chain technology works, the nuances of online content streaming, the importance of latency and the various treats faced by such technology along with the role of penetration testers in its elimination.

The third speaker was Mr Syam Thomas, the youngest regional head for Ujjivan bank, dealt with the importance of date sourcing and organization in effective decision making. He focused on the power of data and how it is used at Ujjivan bank in three areas, namely customer experience, quality assurance and grievance resolution. The final speaker for the day was Mr. Amarnath Basu, head of research group, cloud and mobile computing at Siemens India, who explained how traditional operating functions are being replaced by technology. He also explained the difference between data analytics, artificial Intelligence, machine learning and deep learning along with its practical applications in the industry. Mr. Basu also encouraged students to see cloud computing as a business model rather than just a technology.

The event served as a fruitful session for students to get an insider view of how the industry uses technology to facilitate its operations and how it will shape the future of organizations.


The Operations Club at St. Joseph’s Institute of Management (SJIM) organized an operations Conclave on 16th November 2017. The whole conclave revolved around the topic of what operations is, what it stands for, and what you will learn if you do choose to take this up in the future as a career.

The audience was fortunate to listen to three expert speakers who has very good industry knowledge and experience. The first speaker, Mr.Vidyadhar who has been working as the General Manager, of Sansera Engineering Pvt. Ltd. from 2007,He spoke on the various situations you can encounter when you join as an operation executive, He not only gave an insight on what is expected from the operations industry but also on how to achieve it. The next speaker, Mr. Martin Pampilly Head- Operations Ujjivan Small Finance Bank, spoke about the various challenges faced in Operation, The operations mantra according to him is -to be childlike and understand where it all starts and where it ends The final speaker for the event was Mr. Joseph Anthony who is the Operations Manager at Cisco, focused on the classic question “What makes an operations manager successful?”, according to him to be successful, the main task involves getting all your team members to think alike and give your customers sufficient choices so that they will keep coming back to you. The event also had a fun question and answer round, where the participants who answered correctly were given gift vouchers. The vote of thanks was read by Raveena Roy student coordinator (Operations). 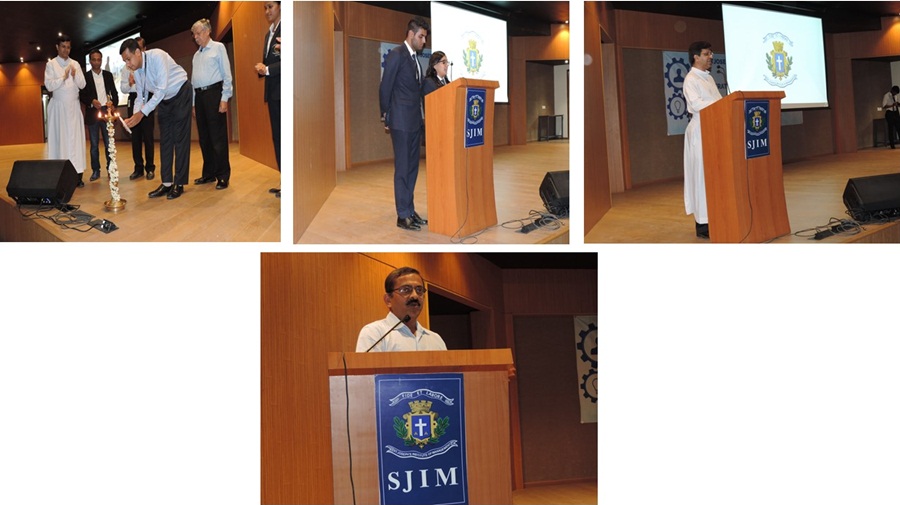 Operations management - "overseeing, designing, controlling the process of production and redesigning business operations in the production of goods and/or services."

The Operations club at SJIM conducts various activities such as industrial visits, guest lectures and involving students in different activities to make them aware of the significance and scope of operations in an organization.

Officially the Operations Club of SJIM was inaugurated on the 16th September, 2016. A quiz on supply chain and operations management was conducted for the first-year students of SJIM as a part of the inauguration. Even before its official launch, the club had organized industrial visits to BEML, Sansera Engineering Pvt. Ltd., BAMUL. In addition to that, club organized various guest lectures from prominent speakers from the industry. Some of the guest speakers were Ms. Amali Sebastian, Mr. Vidhyadhar J (GM Business Development Department, Sansera Engineering Pvt. Ltd.)