The SJIM Finance Conclave 2022 was held on the 10th of September 2022 in the Loyola Auditorium. The theme of the event was 'Resurgence of the Financial Services Sector in India'. The Guest Speakers in attendance were Dr. Thomas K. Philips, Professor, Tandon School of Engineering, NYU; Ms. Lasitha Raj, AVP, HSBC and Mr. Chandresh Ranjan, VP and Head, Liabilities Products, Jana Small Finance Bank. The speakers discussed the developments in the financial services sector in India and the future potential of the sector in catapulting the Indian economy to the next level. Director Rev. Dr. Manoj D'souza SJ, Dean Dr. A. R. Rajagopalan and the Finance Club Faculty Co-ordinator Prof. Ashwin R. John were also present. Student co-ordinator Mr. Venkatesh proposed the vote of thanks.

The Finance Conclave was held on 30th January, 2020 Thursday. The theme of this year’s conclave was “Policy Interventions:Business Challenges &Road Ahead”. Speakers for the session were Mr. Srinivas S.KChief Manager, SBI, who spoke about various initiatives through policy interventions resulting in Jan Dhanyojana – in the area of financial inclusion, Mudra loans, UPI and the challenges thereof. The second speaker was Mr. Ashok Herur, ex General Manager, Wipro Technologies, who spoke on Insolvency & Bankruptcy code (IBC) – its process, benefits and challenges ahead.

The Finance Conclave on 10th Jan 2019 started off with the lighting of the lamp by the dignitaries. The guest speakers were welcomed by our dean, Dr. R. Narasimhan. The conclave theme - Investing Minds was introduced by him with a little introduction about the same. The speakers were then felicitated by our Director Rev. Dr. Manoj D’Souza SJ, with saplings. The first speaker, Mr. Jayesh Doshi, spoke about the stock market in India and its growth over the years. The second speaker was Mr. Suresh Pai, who spoke about the Indian Bond Market. The third speaker, Mr. Naveen Fernandes spoke on crypto currency and investing on bit coins. The conclave was then closed by a vote of thanks by finance student coordinator Vimal Clyton. 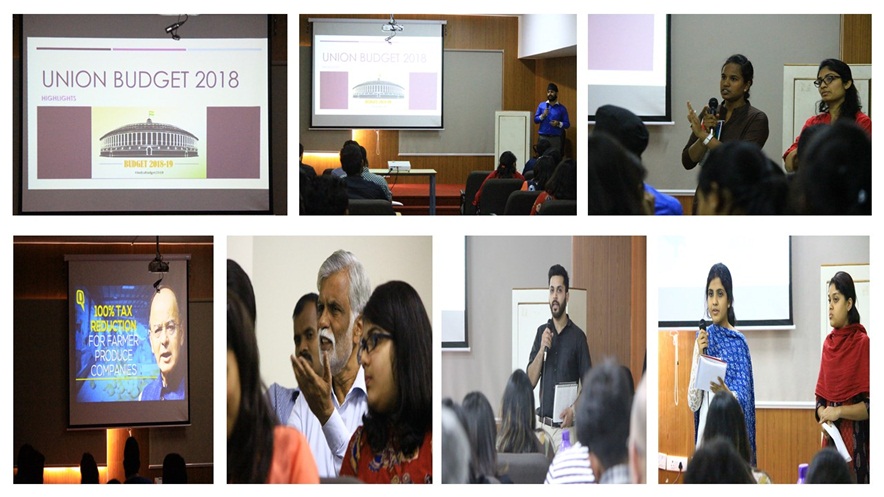 The Finance Club of SJIM is a student driven initiative that collaborates with both the corporate and academia from the financial sector to provide a platform for students to improve their quantitative and analytical thinking abilities. Students are encouraged to place their views on a wide range of topics like wealth management, banking, investment banking and economic growth. This helps them to get in touch with the realities of the financial world. The club also undertakes these activities with a view to make students aware about career opportunities available in the domain of Finance.

The finance club organizes a number of events to ensure that the students are better prepared to handle the nuances of the financial services industry. In a first of this kind, students of SJIM had an open discussion on the annual budget of 2016. Students placed their views on different aspects of the budget and its impact. They also expressed their opinion on how the budget could be different and compared it to the previous year’s budget. A session on Brexit was also organized to share our views on reasons for Brexit, how it would impact UK, European Union and India. A seminar was organized to make students aware about career opportunities in the Finance domain and to give them a gist on the valuation model of companies. A quiz on current affairs, and on basic financial and accounting concepts was conducted. The club also organized a combined session with faculty and students and it started off with GST discussion, including the key amendments of GST and how to pass the bill. A Finance Conclave was organized on 22nd September 2016 with the support of our Faculty Coordinator, Dr. S. Maria. Immanuvel.